I recently had to optimize the performance of a PHP-based API on Cloud Run. After a performance test, we discovered that the API became very slow when we put some serious load on it (with response times exceeding 10 seconds). In this post you’ll learn what changes I made to get that down to a stable 100ms.

The API uses PHP 7.4, Laravel 8.0 and MySQL on Cloud SQL (the managed database on Google Cloud). The API needs to handle at least 10,000 concurrent users. The container image we deploy to Cloud Run has nginx and PHP-FPM.

This is what I did to improve the response times. (Don’t worry if not everything makes sense here, I’ll explain everything).

The application uses nginx and PHP-FPM, which is a process manager for PHP. PHP is single threaded, which means that one process can handle one (exactly one) request at the same time. PHP-FPM keeps a pool of PHP workers (a worker is a process) ready to serve requests and adds more if the demand increases.
It’s a good practice to limit the maximum size of the PHP-FPM worker pool, to make sure your resource usage (CPU and memory) is predictable.

To configure PHP-FPM for maximum performance, I first set the process manager type for PHP-FPM to static, so that the specified number of workers are running at all times and waiting to handle requests. I did this by copying a custom configuration file to the application’s container and configuring the environment so that these options will be picked up by PHP-FPM (you must copy the configuration where it is expected, in my case, into /usr/local/etc/php-fpm.d/). The settings I needed are:

However, if you set a limit, and more requests come to a server than the pool can handle, requests start to queue, which increases the response time of those requests: 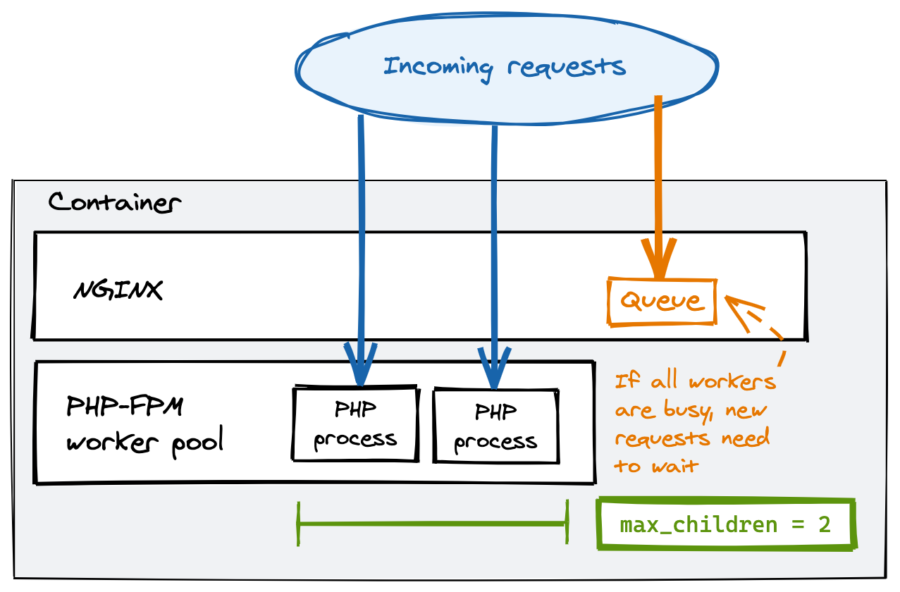 To avoid request queuing in nginx, you’ll need to limit the number of requests Cloud Run sends to your container at the same time. 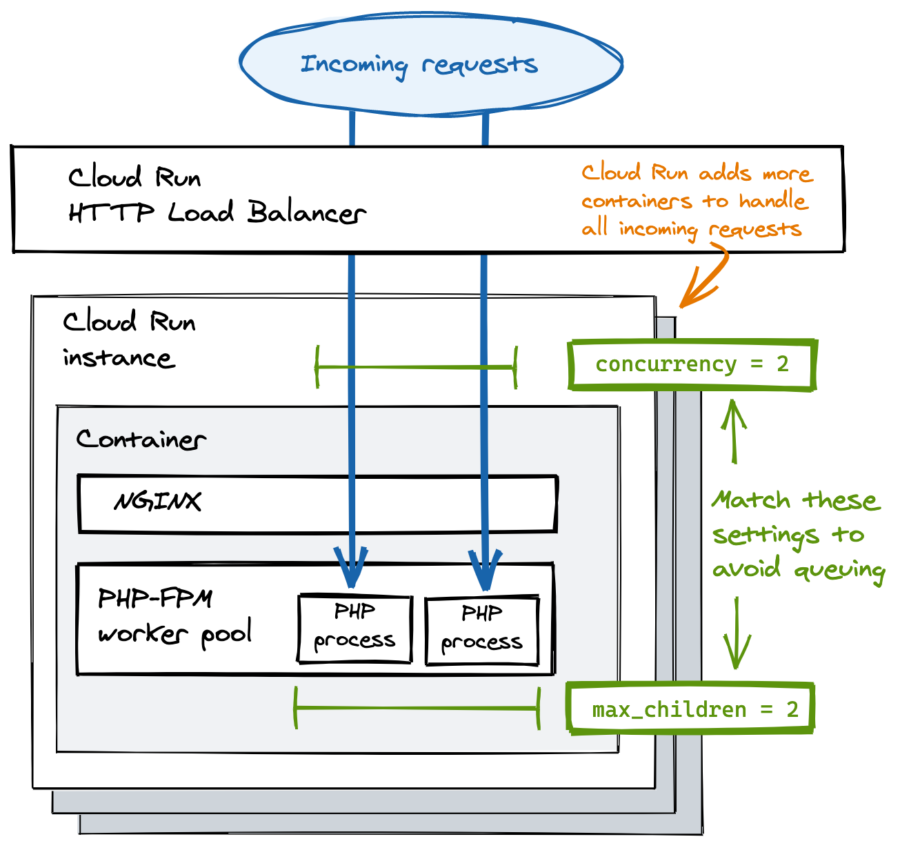 You really want to make sure Cloud Run’s concurrency setting matches the maximum number of PHP-FPM workers! For example, if Cloud Run sends 100 concurrent requests to a container before adding more containers, and you configured your PHP-FPM to start only 10 workers, you will see a lot of requests queuing.

If these tweaks aren’t enough to reach the desired performance, check the Cloud Run metrics to see what the actual utilization percentages are. You might have to change the amount of memory and vCPUs available to the container. The downside of this optimization is that more containers will be running due to lower concurrency, resulting in higher costs. I also noticed temporary delays when new instances are starting up, but this normalizes over time.

OPCache is a default PHP extension that caches the compiled scripts in memory, improving response times dramatically. I enabled and tweaked OPCache settings by adding the extension’s options to a custom php.ini file (in my case, I put it in the /usr/local/etc/php/conf.d/ directory). The following is a generic configuration that you can easily reuse, and you can refer to the documentation for the details about every option.

Composer is a dependency manager for PHP. It lets you specify the libraries your app needs, and downloads them for you to a directory. It also generates an autoload configuration file, which maps import paths to files.
If you pass the --optimize-autoloader flag to composer, it will generate this file only once, and doesn’t dynamically update it if you add new code. While that is convenient in development (your changes show up immediately), in production it can make your code really slow.

You can optimize Composer’s autoloader passing the --optimize-autoloader flag like this:

The application I optimized is built with Laravel, which provides a number of tools that can help improving the performance of the API. Here’s what I did on top of the other tweaks to get the response times below 100ms.

In this blog, I shared with you what I learned from optimizing the performance of a PHP-based API on Cloud Run. All of the tweaks together helped cut response times to one tenth of the original result, and I think the most impact was made by matching concurrency and PHP-FPM workers (if you’re in a hurry, do only this). Watching the application metrics has been fundamental throughout the performance testing phase, just as inspecting Cloud Run logs after each change.

If your application still shows poor performance after these changes, there are other tweaks you can make to improve response times, which I haven’t discussed here.

Would you like to learn more about Google Cloud Run? Check out this book by our own Wietse Venema.

by Luca Cavallin
Luca is a Software Engineer and Trainer with full-stack experience ranging from distributed systems to cross-platform apps. He is currently interested in building modern, serverless solutions on Google Cloud using Golang, Rust and React and leveraging SRE and Agile practices. Luca holds 3 Google Cloud certifications, he is part of the Google Developers Experts community and he is the co-organizer of the Google Cloud User Group that Binx.io holds with Google.
linkedin.com/in/https://www.linkedin.com/in/lucavallin/
Share this article: Tweet this post / Post on LinkedIn
Previous article Cloud News - March 2021
Next article How to create your own Google service account key file