Access management is a crucial part of managing your workloads. It is also one of the primary areas where debugging can be problematic. In AWS, there are multiple ways to control access to the platform at various levels. These permission policies make it possible to optimize control of applications, programs, and resources, so day-to-day operations run as smoothly as possible. AWS has many options to create secure policies on its platform.

AWS identity access management is a web service that securely enables user or application access to AWS resources and services. It allows users to control and define what users or applications are allowed to do within an account by authenticating and authorizing the user. It also limits what users can do. Within IAM, you have users and roles; unlike a role, a user can be organized into groups. Within IAM, these entities are referred to as principals. Principals can only perform actions when granted permission.

IAM roles are not unique to a single individual, they are like a hat that any users or resources can wear if they have permission to do so, and it can give you a temporary “superpower”. Roles permit actions executed by AWS services, and users can assume a role. For example, an AWS service can request temporary access by assuming a role. The most commonly used services are Amazon Simple Storage Service (Amazon S3) buckets, Amazon Elastic Compute Cloud (Amazon EC2), AWS Lambda, and Amazon DynamoDB. Roles are used either within the web console or through a program such as AWS CLI.

IAM policies are attached to users, groups, roles and resources. This makes managing permissions in your workload more manageable, particularly for smaller organizations with a small number of accounts. In the case of broader permissions, with multiple accounts. In these cases, you typically have a platform team managing the account vending process. And you probably have some standardized resources that you deploy. The workload teams should not alter these resources because they are created by the workload team. You can protect these resources on an organizational level using Service Control Policies (SCPs).

Policies are created based on a user’s request and authorization. They should follow the principle of least privilege. A policy defines permissions and determines access or denial when an IAM principal (user or role) requests it. A policy is nothing more than a JSON definition. You can write them from scratch, copy from existing ones, or use the visual editor, you define the policy, but AWS does the enforcement. AWS also offers managed policies that are managed and maintained by AWS’s team. You can use them directly and let AWS maintain them or, you can copy and modify them according to your needs. Each user and role can have policies attached to it. Users can inherit policies based upon the groups they are a member of. At the time of writing, there are a maximum of 10 policies that you can attach to a user or role. This is a soft limit and you can request an increase with a maximum of 20.

There are six types of policies AWS supports which are mainly composed in the JSON policy document format:

When your organization grows you will face multiple challenges. One of them is that you onboard more people to your organization. You can use your existing SSO (Single Sign On) solution or use AWS Single Sign On to authenticate these users. Allowing them to assume a role in one of the AWS Accounts.
Another challenge would be that you separate your workloads across multiple AWS Accounts. This would lead to more and more AWS Accounts while you grow. A common practice is also to split environments across multiple accounts. So for a single workload you could easily have development, testing, acceptance and production accounts.

These challenges can be addressed using AWS Organizations. It allows you to centrally manage the accounts itself and access to them. It would also allow you to manage SCP (Service Control Policies).

Service Control Policies are a policy type found in AWS. SCPs work well in large organizations because they allow the organization to split the responsibilities. With an organizational SCP you can deny complete services, or only a handful of actions. These SCPs have the same policy structure as the IAM policies with one difference. They apply to the whole AWS Account. For example, when you have a certain blueprint of how an AWS Account needs to look like when you hand it over to a workload team. You can protect these resources from being altered or deleted by the users and roles used by the workload team.

An SCP is placed on an Organization Unit (OU) and is applied to all accounts in the OU including any nested OUs. One of its primary functions is to ensure that all accounts stay within an organization’s access control guidelines. This means that while SCPs do not grant permissions, they do, however, define the limits and actions of IAM users and roles. SCPs effectively act as the guardrail of all accounts an administrator controls.

An SCP can override an IAM policy. In effect, an SCP helps organizations resolve problems that may arise in an evolving cloud infrastructure. Because organizations tend to have many moving parts, with different teams, departments, hierarchies, etc., SCPs help define the boundaries of what is allowed within the account. In the account itself you still need to define the access rights for each principal. If the principal is granted access that is denied by the SCP. The principal is not allowed to perform that action.

Working with an SCP Example

When you try to create a xebia-platform-myworkload S3 bucket using the “Developer” role. You will get an error like this:

When you create a xebia-workload-myworkload S3 bucket using the “Developer” role. You will be able to create the bucket.

This is a simple example but it illustrates the power of a SCP. From an organizational point you can prevent developers from creating platform buckets. And you prevent administrators from creating workload buckets.

This also creates a problem for the developer role. An action is denied but from the account perspective the developer role should be able to create a xebia-platform-workload bucket. The solution to this is using the IAM Policy Simulator. You can select a role, action and the resource and simulate what would happen.

As you can see the action was denied. But it also states that it is denied by AWS Organizations. Now the developer knows that the action is blocked due to a SCP.

Permission Boundaries: Why do you need to start using them? 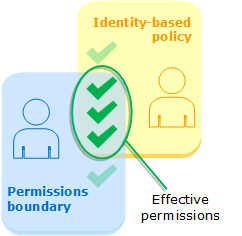 This is what AWS calls the “Effective permissions”. From the organizational point of view, you manage the permission boundaries. The developers can create their own roles but only when they attach one of the boundaries you made available.

As you can see in this example policy, we deny the actions when there is no permission boundary called xebia-default-boundary.

How to Debug Permission Errors

As a developer, you might run into permission errors. These errors might not make sense because from the developers perspective all policies are set correctly. In these cases, you might be running into a SCP that has blocked you from performing the action.

For this reason, it’s useful to use the policy simulator. The simulator will allow you to select a role that you created. Followed by the service and action you want to simulate. This will tell you if the action is allowed or not. But more importantly, it will tell you why it is denied.

The best practice is to document functions for each role, define permission according to a function with the least privileges using the “allow” action, and avoid using the “deny” action.

by Joris Conijn
Joris has been working with the AWS cloud since 2009 and focussing on building event driven architectures. While working with the cloud from (almost) the start he has seen most of the services being launched. Joris strongly believes in automation and infrastructure as code and is open to learn new things and experiment with them, because that is the way to learn and grow. In his spare time he enjoys running and runs a small micro brewery from his home.
linkedin.com/in/jorisconijn

by Nima Saed
Nima is an ethical hacker and DevSecOps engineer at Xebia Security. Nima's mission is to change security engineering from being a blocker to an enabler. Besides being a consultant, he also works as a trainer for secure coding, threat modeling, and AWS security engineering topics.
linkedin.com/in/nimasaed
Share this article: Tweet this post / Post on LinkedIn
Previous article CloudFormation Custom Resource: Transit Gateway Peering Accepter
Next article How to create Microsoft SQLServer databases and users with AWS Cloudformation