“Every company is a data company”. That’s why in most companies, trusted data, like PII or financial data, is processed. To improve a company’s service or profitability, this data will often be used with machine learning algorithms to detect patterns. For data scientists, it’s a big asset to train machine learning models securely with production data. It isn’t easy to do this securely and is therefore often rejected by security and privacy specialists in companies. The biggest fears are the risk of data exfiltration and the lack of oversight in what data is accessed by whom, where and when. This can be avoided by placing Vertex AI Workbenches within VPC Service Controls.

In this blog I’ll show how VPC Service Controls can be used to prevent data exfiltration and apply fine-grained access controls for Vertex AI Workbenches. These so-called Service Perimeters are designed specifically to limit access to Google’s APIs and prevent data from being extracted from an environment. For the data scientists Vertex AI Workbench instances are employed. Audit logging will be done using personalized service accounts. I will show you how this can be done in a high-level overview.

This reference design will give you a high level impression of the infrastructure that will be discussed. 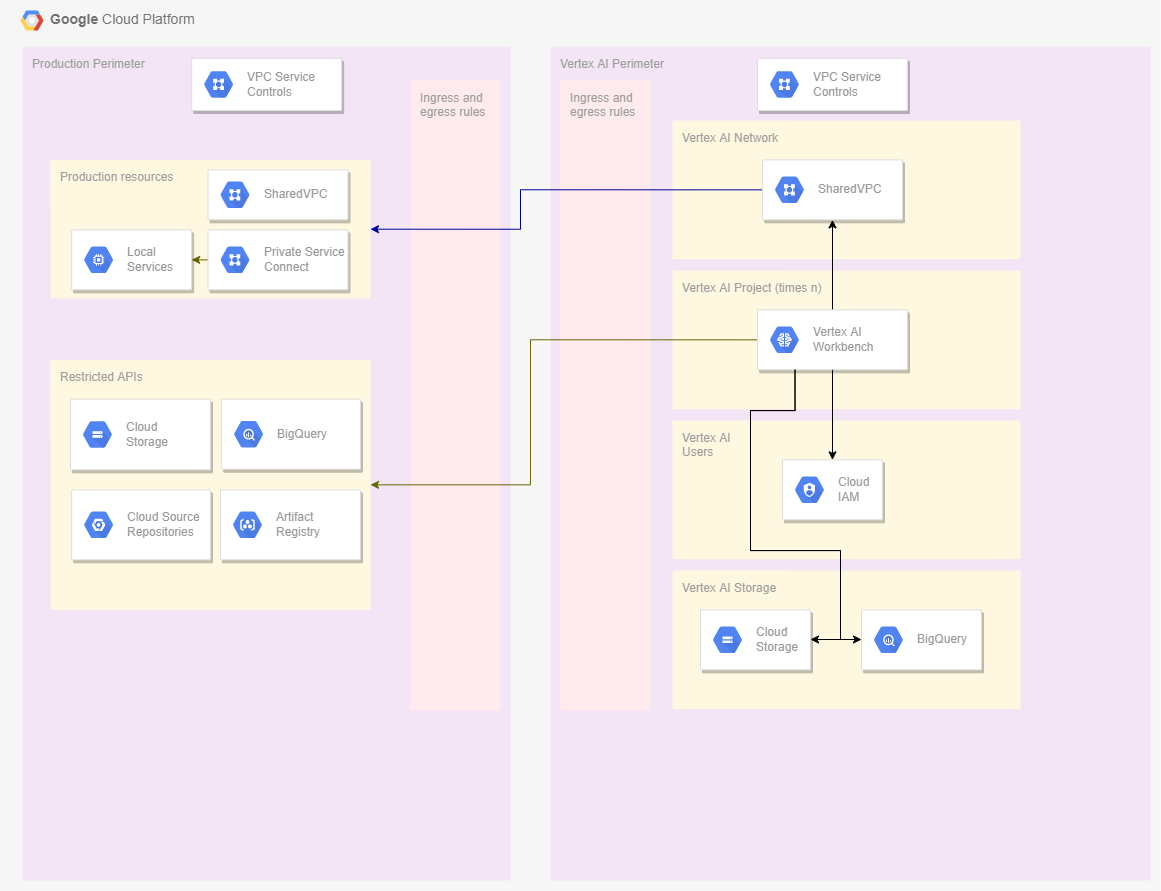 What are VPC Service Controls?

The concept of
VPC Service Control (also referred to as Security Perimeters or just perimeters) deserves its own blog posting, but to give you a general idea:

There are situations where you want to limit what APIs can be called from an application. Google has created VPC Service Controls to enable this, providing means to set up a virtual perimeter around these APIs. Setting up such a perimeter, made it possible to restrict which APIs could and which couldn’t be called. These VPC Service Controls can be enabled at GCP organization level. Scoped policy configuration can then be delegated to folder-level and project-level administrators.

Why should you use VPC Service Controls

Google has described the substantiation of the development of VPC Service Controls in their documentation. In short there were a couple of motives for this. Implementing VPC Service Controls allows for a more strict isolation of networks and services and actions that can be performed from within these networks. This means that data can be stored within it’s own service plane, where rules can be applied on data transactions and what can be done with it. To make sure that resources can still reach certain Google APIs there are two special CIDR-ranges assigned to the APIs named private.googleapis.com and restricted.googleapis.com.

With Private Service Connects a connection can be made from resources in one perimeter to self managed resources in another perimeter. This is necessary because we won’t have an internet connection on the data science side and requests therefore can’t traverse the internet.

To allow proper auditing of data access we need a clear way to identify the person who is making the request. Since all requests coming from a machine are identified by the service account, it can be hard to identify the actual person behind the request when coming from within the JupyterLab proxy. Therefore we will be using personalized service accounts that are one-to-one linked to a physical person.

What VPC Service Controls will we be needing

For this use case we need two Service Controls. One for all our production services, where the data is also stored securely. Another where the Vertex AI Workbench instances can be deployed. This last one will only need access to specific services from the production perimeter, but cannot have any outside world access. Be aware that each perimeter should have it’s own SharedVPC. All resources connected to a network are considered to belong to the same perimeter. This can cause a lot of confusion if done incorrectly.

First create a VPC Service Control that will contain your production resources. Especially in an already existing environment, this will be one of the most sensitive parts. Pay close attention that your current services can still connect to the required APIs after being configured. This is especially the case for your resources like BigQuery and Cloud Storage, for which you need to restrict the access. Configure it such that all projects belonging to this perimeter have full access to these resources. It’s possible to include specific projects into your perimeter, but it will be easier to configure it to include entire folders. This is easiest when you have structured your GCP organization correctly using folders.

To still allow the resources within this perimeter to access the right APIs, configure routing to the Google APIs CIDR ranges. Do this by following the steps as dictated in Google’s documentation. Do note that the CIDR ranges for the restricted APIs are assigned as 199.36.153.4/30 and the private APIs are assigned as 199.36.153.8/30. This is not clearly mentioned in this documentation.

The data scientists will probably want to store intermediate models and work with the data within the perimeter. For this add Big Query datasets and Google Cloud Storage within the perimeter itself. These storage resources should obviously have the possibility to read and write, opposed to the policy set for the production perimeter.

Pay close attention to the access levels and access policies. If you fail to do this properly, you will notice that specific resources cannot be accessed correctly. The worst case is that you will experience failures in your production services, but it can also result in annoying HTTP 401 or 403 errors when trying to access the Jupyter notebook proxy that you will set up later.

There are two ways to grant access from the AI perimeter to the Production perimeter. One way will be by setting up a Perimeter Bridge. You can look at it as another perimeter that is used as an overlay across the perimeter projects that need access to each other. The other way is by specifying egress and ingress rules. A Perimeter Bridge can be sensible if you have a fixed set of projects. A bridge also needs to be configured at the organization level. For this blog the alternative solution of Ingress and Egress rules will be used. This is because they allow for a more granular configuration of the desired policies. This also provides the option to use Private Service Connect to self managed services.

Create an egressFrom rule from the projects in your AI perimeter. Grant this access to ANY_SERVICE_ACCOUNT. Then specify the egressTo where you list the projects containing your Cloud Storage and BigQuery production datasets. Also, describe the allowed operations. Since you will probably only want to allow read access on your production perimeter, you must specify the operations accordingly.

The previous egress rule only described the allowed traffic from the perspective of the AI perimeter. Now create a similar rule to allow the actual ingress on the production perimeter. You can use the same description as before, but in this case, use the ingressFrom and ingressTo rules. Here you also need to ensure that only read access is allowed for data inside production. Additionally, you can choose to apply tooling to remove PII data with a high impact level (NIST – PII – Impact Level Definitions).

Often some resources still need to be accessible, especially from a secured perimeter. An example can be a private Artifactory where only allowed packages are hosted. Configure a Private Service Connect so that you can access the required resources.

For proper access control and audit logging, you need a way to control who has access to what and when. In a static environment access to specific data can be assigned manually for the default service accounts. In most cases, however, the projects will come and go, and so do employees. To solve this, we will centrally manage the service accounts.

Setting up the service accounts

This is typically the easiest step, depending on how your users are managed. In many companies a system like Google Workspace or LDAP is used for this. From your user management system, you will need to generate a service account for each user that wants to take advantage of the data science tools. There is a caveat: the default quota per project for the number of service accounts is set to 100. If you have more users, you need to request a quota increase. Also, ensure that these service accounts are maintained frequently to avoid persistent accounts for employees that no longer should have access. These service accounts can best be created and managed in a centralized project within the perimeter. You should be able to use the same project as your SharedVPC for this.

This step is typically manual. Someone with the privilege to assign access to datasets should allow specific access for each of the created service accounts. This should only be set to read access and on the required resources in the production perimeter.

We’re finally at the fun part: creating the Vertex AI Workbench instances in projects within the newly created AI Perimeter.

There are two ways to restrict access to Vertex AI Workbench instances. It can be user-owned or accessible by anyone who can impersonate the connected service account. Remember that the service account is always required, so the additional user is optional.

I will keep this short and leave the implementation up to the engineers. With lifecycle management we want to make sure that notebook instances won’t be eternally living resources. Reasons can be because of possible usage of PII data that should be removed within a specific amount of time (right to be forgotten). Also the cost of long running instances will rise dramatically if not managed properly. It is wise to get the users aware of the price tag and provide the option to stop machines when not being actively used. If a machine should be removed without messing too much with statefiles from tools like Terraform, you might just want to stop the machine and detach the bootdisk. Then the resource can safely be removed in a later run without the risk of it being restarted in the meantime.

This blog described how a company can allow data scientists to train machine learning models securely with production data. Getting this done is a complex task consisting of a combination of techniques. Teams implementing this strategy should be in close contact to ensure that priorities and actions are continuously aligned.

Once done, a data scientist should be able to get its Vertex AI Workbench instance training machine learning models with production data, within the confines of a security perimeter.