Imagine a dystopian situation where you need to communicate with others but the existing infrastructure is not available and the world is in flames. Although a global power outage, Internet failure, or all-out apocalypse may seem unlikely, it served as a source of inspiration for three creative Binx consultants, who created the Doomsday Machine.

The idea came to them during one of the Xebia Knowledge Exchange (XKE), an event organized by Xebia every fortnight, where different units of the company come together to attend talks and presentations carried out by colleagues.

Some people focus on sharing their technical knowledge, while others put their inventive skills into practice. In the case of Thomas de Ruiter, Thijs de Vries and Joris Conijn, they did the latter, sharing the creation of their “Doomsday Machine.” 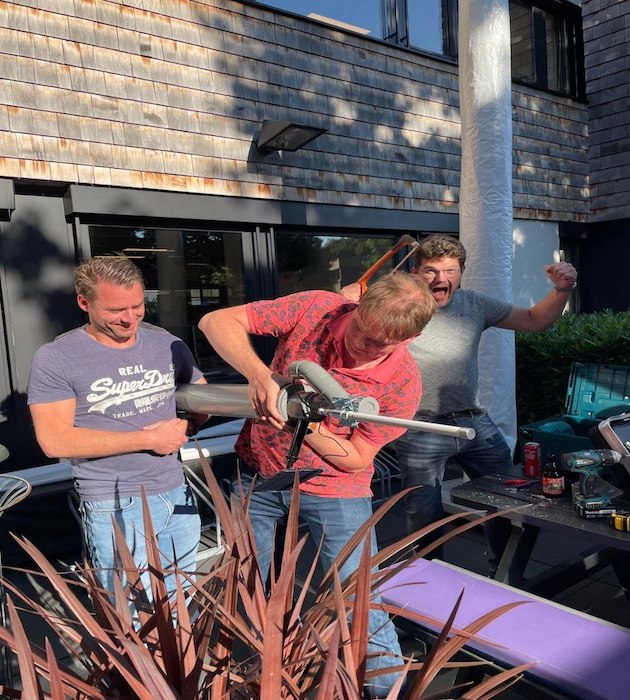 Inspired by a post-apocalyptic book, the three Binx cloud consultants ambitiously took on the project of creating an antenna which could communicate with a twin antenna, placed in a second location, without the need of internet (or connection) using only solar energy.

“In case there is a zombie invasion coming to the Netherlands, if we put this antenna on top of the Hilversum office, we can then communicate with the Amsterdam office, and hopefully survive”, said De Ruiter.

The antenna has a very rustic DIY look, which fits perfectly with its name “Doomsday Machine.” The body was made of a PCV tube, which is extremely light and allows whoever transports it to move it around effortlessly. The head of the antenna consists of the solar panel, a transmitter and a hand-made, yet-to-be-patented, “magical” Binx device inside the tube. De Ruiter, De Vries and Conijn crafted it by inserting the special Binx device inside the tube, pairing it with a second, mobile device that measured signal strength. 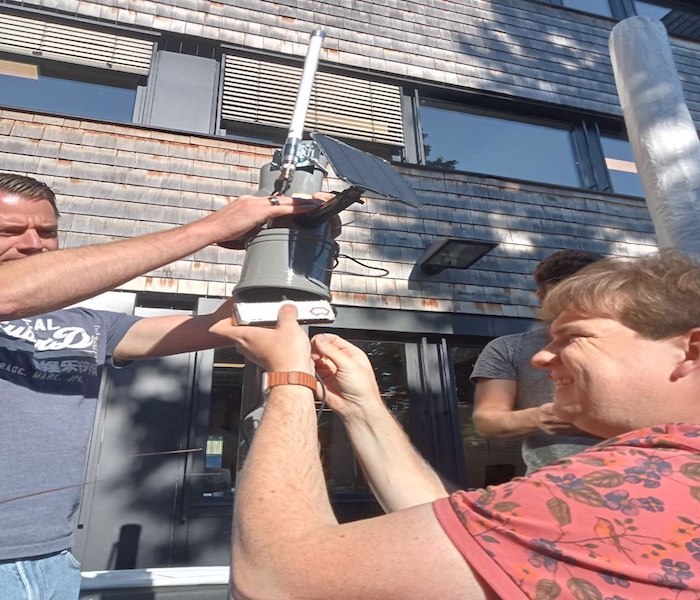 In theory, once they have sent a message from the mobile device, the device inside the tube would then receive the message and send back a recognition for signal strength as a number. This function would allow them to measure the strength of the connection based on distance.

As original and inventive as the idea sounds, in practice it is much more complicated, but then again like De Vries said, “It is not fun if it is easy”. This describes perfectly the energy and attitude at Xebia, a creative space where people can fuel their knowledge and skills through creating innovative things and sharing these ideas. The attitude is contagious, as it pushes others to think outside of the box and not be afraid of mistakes.

According to the makers, it is not a satisfying project if there are no challenges along the way. As De Ruiter explained, “There is always the possibility of learning,” referring to the few obstacles they faced throughout the duration of the project.

In fact, the trio encountered several problems with the signal between the two devices. The stable device in the antenna only worked when outside the tube—not when positioned inside, as planned. The solution was to directly connect the fixed device with the mobile one through Bluetooth. 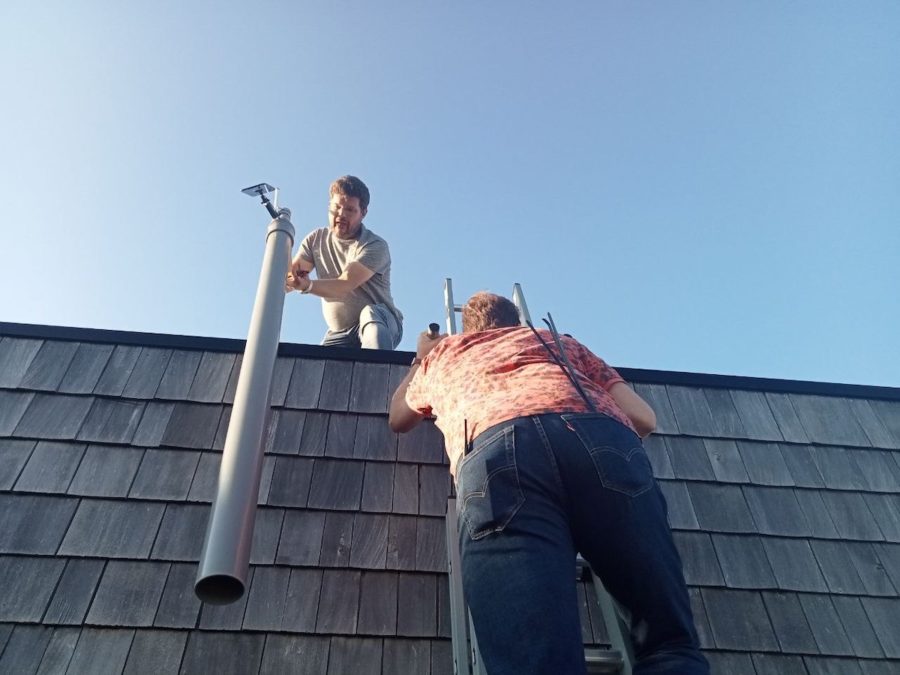 Another challenge was to find a place in the Hilversum office high enough to position the antenna. This was intended to avoid absorption of RF signals by non-reflective obstacles, especially people. The most suitable area was the roof of the office, by the ventilating system. Although it seemed like the best location for the antenna, the three makers had to work out which position on the roof would be the least hazardous. When you are placing a relatively big antenna on a roof, there are many safety factors to consider, from heavy wind to lightning.

Ultimately, the project was a success. Not only did the antenna work, but the little obstacles they faced and overcame made the activity enjoyable and fun. As De Vries explained, “I learned something today, which is always important for keeping productivity and creativity high.”

So, if you happen to find yourself in a dystopian future, and all existing communication channels fail, let’s hope you run into Thomas, Thijs and Joris — or at least find yourself at the Xebia offices— otherwise, good luck! 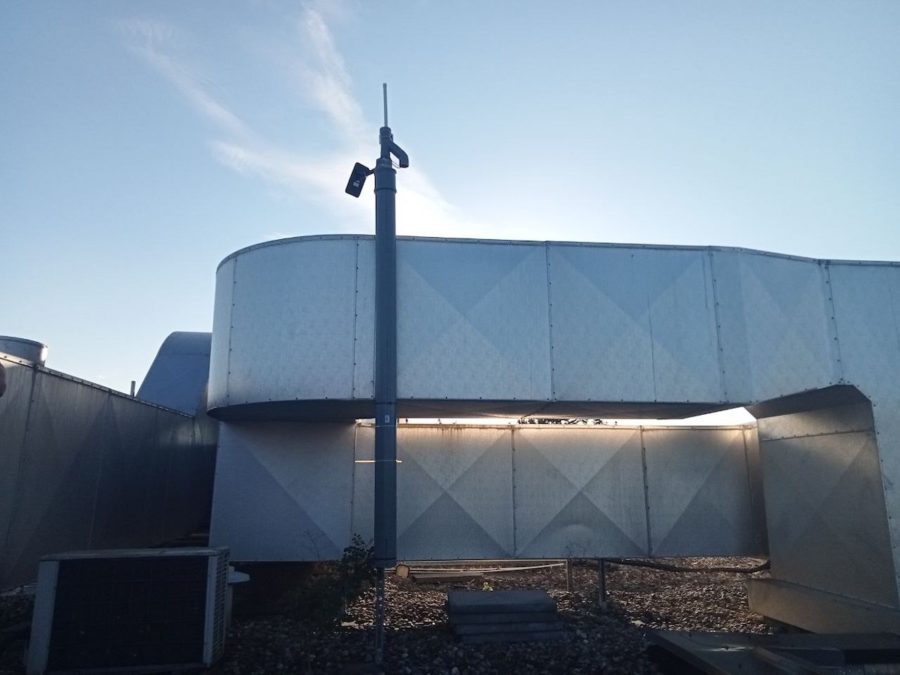 by Riccardo Felloni
Content specialist who has a background in journalism and a passion for media and production.
Share this article: Tweet this post / Post on LinkedIn
Previous article Python Poetry for Building Docker Images
Next article How To Run Startup Scripts On Hardened VMs