Loving Every Dimension of Consulting

For many people, it’s rewarding enough to be able to make a difference in other people’s lives. But Laurens Knoll needs more. The senior cloud consultant at Binx isn’t happy unless he’s grappling with a complex issue that yields big results. “I like to keep on learning and giving my best to clients each day,” he says.

Laurens’ credits Binx’s position as the Netherlands’ leading cloud experts for enabling him to work with a wide variety of different cloud vendors. His own background is in Azure, but he can use cloud products from Google, AWS, or Alibaba to create the solution that best fits each client.

“The cloud has revolutionized the software process, allowing people to build entire systems themselves. And through my work at Binx, I’m really happy to help people along that journey, to help them build cool stuff.” 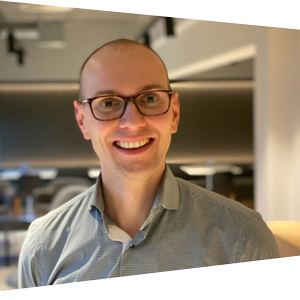 Piecing A Path to Consultancy

Laurens, a father-of-two, is ideally suited to consultancy—although he took a circuitous route to get there. Laurens started out in IT because his innate curiosity drives him to try to understand how things work. “I want to be able to look at things from the inside,” he says. A technical informatics degree landed him a job at a small company, creating products for local government organizations. “That’s when I fell in love with software engineering,” the native of Wageningen says, “because I could see how our automation software was making an impact, how it was helping government officials to help other people, generating job satisfaction in the process.

“Eventually, I felt I needed to broaden my view,” Laurens explains. “First by finishing a master’s degree in software engineering to understand the software process better. And then by switching organizations and roles to learn what works, and to grasp why it works.”

From a career perspective, the pieces fell into place when the puzzle enthusiast arrived at Binx a year and a half ago.

“The working environment for software engineers at Binx varies considerably from other companies,” Laurens says. “In my career as a software consultant so far, I’ve found that we can build out nice features and capabilities, but it’s always scoped to a certain part of the system. Binx allows me greater control over the process, to really take a big-picture view of the solution for each client.”

Software consultants are often restricted to code-only concerns, whereas at Binx, Laurens has the freedom to explore both the technical and organizational environments. He can then advise the client on specific cloud solutions and what needs to be built out or not.

“The ability to have those discussions with clients and to inspire them to get the best—that’s what I really enjoy,” he says. “Good isn’t enough. I like to make things great, and it’s great that I have the opportunity to do that here at Binx.”

Laurens dove in at the deep end with his very first Binx project, which required building a data platform for a cinema client. To get a broad picture of the client’s total environment, he spoke with a lot of people first and learned what kind of data sources they were using. Thanks to Binx’s position under the Xebia umbrella, he was then able to leverage solutions from across the group, using expertise within units such as GoDataDriven. Putting the different pieces of the puzzle together allowed him to use his analytical and creative skills to find the best solution for his client. “It wasn’t necessarily difficult work, but it was a lot of communication and decision-making,” he says.

Another job for a retail client required building a cloud platform to support 200 shops across the Netherlands as well as an international web interface. With some clever detective work, Laurens was able to help improve system performance by changing the metrics used and maximize efficiency by taking advantage of the cloud’s innate elasticity. Consequently, start-up process times were slashed from over a quarter of an hour to only a few seconds.

The Four Dimensions of Consultancy

Laurens compares his role as a consultant to a four-dimensional matrix.

“Consultancy is a pretty intellectual game, where you’re solving problems, but you also meet an enormous amount of people and visit a lot of organizations,” he says.

That’s over and above the nuts and bolts of the actual job itself, which in his case, is one of his great passions.

“A fourth area of learning arises from our representation and work with the different cloud vendors. Because our work derives from a company’s existing relationship with a vendor, for example, we have a ringside view into how the cloud vendors work. What’s cool is being able to play on all these fronts – you grow tremendously as a person because of that—and that’s really important to me.”